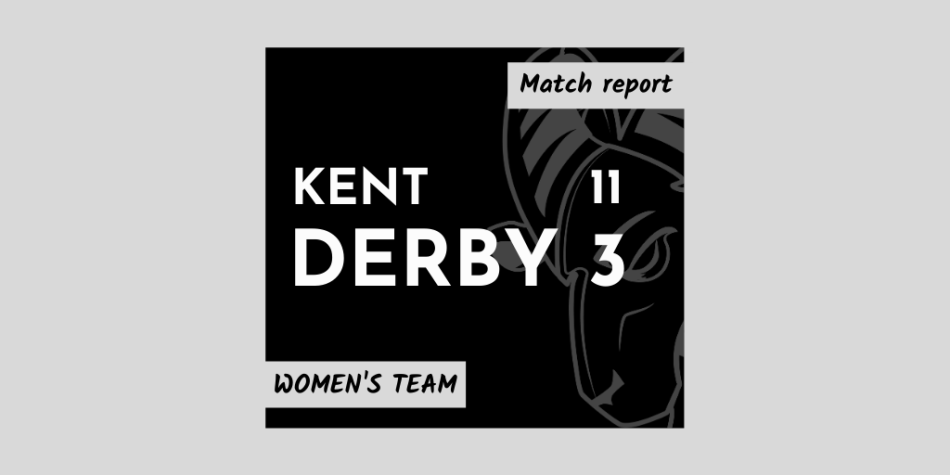 Kent ran out eventual winners of the fixture 11-3, but team captain Hannah Roberts knows that the team can only improve; “the work rate was spot on and the little mistakes will be ironed out as we play more together.”

As this was the opener of the new National Futsal Series, and the first time some of these players had played together, Roberts knew that the game would be tough, but was impressed with what she saw; “going into the game we knew it would be a battle, and with very little training time under our belts we showed our inexperience in the first half, but big credit to the girls in the second 20, it was like a different team.”

Making their debuts for Derby were Kayla Kret, Lauren Asquith (Squiff), and Brooklynn Meinke (BK). “Squiff, Kayla and BK all made brilliant debuts, and it was great having Faye [Davies] back as well.”

Regardless of the start Head of Futsal, Matt Hardy was encouraged by what he saw; “I’m really pleased with the way the girls applied themselves in the game today and despite a really disjointed pre-season, with little preparation, they did themselves proud.”

It was Kret that scored Derby’s first goal of the season. Picking the ball up on the right flank, she drove forward and fired the ball low to the back post where the ball found the bottom corner. Kret could have added to her tally on the day, as before her goal she saw her shot from a corner routine fizz just over, and her close range header hit the bar.

The second for Derby came from a similar position to their first. Derby played the ball out from the back, Roberts passed it down the line on the right, finding Fran Critchley-Watson who shot low under the keeper.

Captain Roberts got the third and final goal for Derby. Kret cut out a pass in the middle of the court. She played it forward to Meinke, who laid it off to Roberts, who tapped it passed the keeper.

Despite the loss, Hardy is in a positive mood for the season ahead; “We’re trying to integrate new players, develop the ideas and become more competitive, so to come down today and show for large parts that we will compete once things have bedded down and the girls fully understand what is being asked of them.

“I’m immensely proud that this team is in the competition and I know I speak for all of the staff and the squad when I say we’ll be looking forward to the next one and itching to get back out there.”

Derby Futsal Club Ladies face Birmingham in the next round on 9th November 2019.