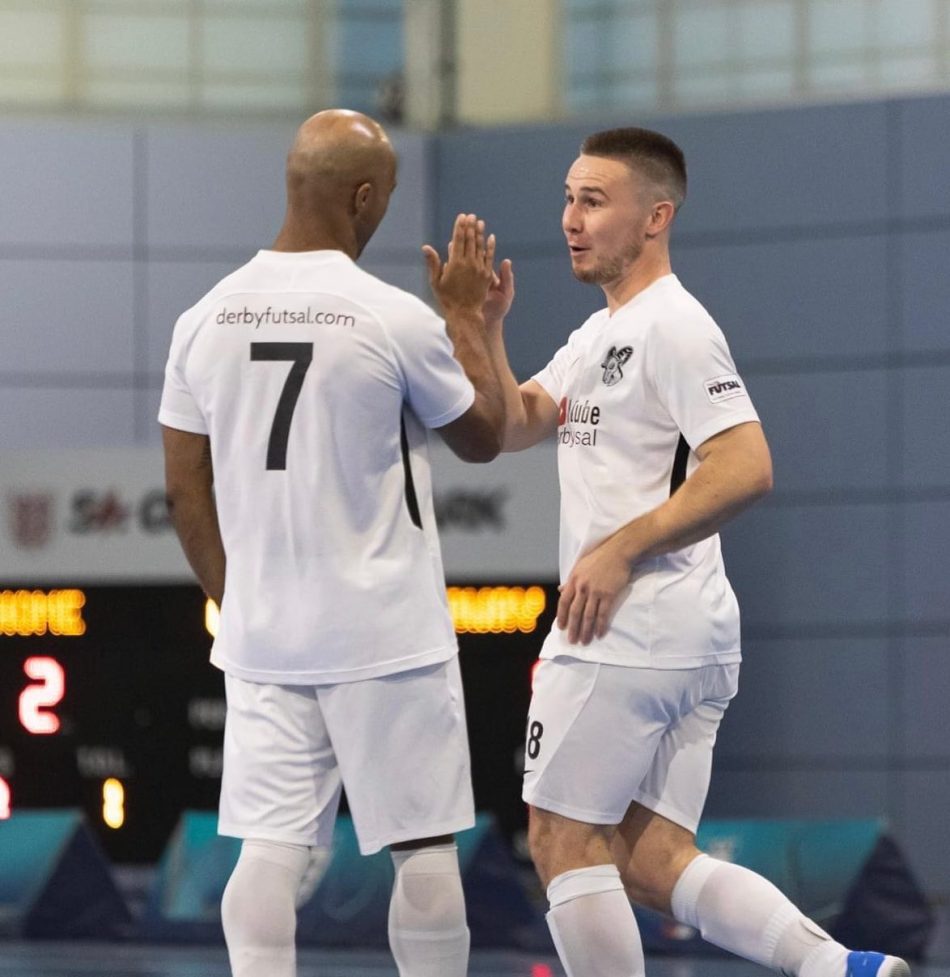 Derby went into the game a point behind York with a game in hand, also needing an abundance of goals to improve their goal difference to secure that top spot. Trent Valley is now still searching for their first victory of the season and stay at the bottom of the table.

Jelinskas scored five as Derby’s dominated from the first whistle to the last. He and The Rams first of the game came inside the first 30 seconds. Intercepting the Trent keepers pass Jelinskas stayed composed and slotted the ball into the net.

Trent Valley were level moments later with a good move finished off well just out of Derby Keeper Poulson’s reach, however, to end a hectic opening two minutes, Jelinskas got his second of the game as Derby retook the lead from the penalty spot.

Two minutes later, the third goal came for Derby as Joe Illston played a clever lofted pass to Gareth Keeling who with his right foot volleyed home into the bottom corner. Illston was involved for the fourth as he latched onto a pinpoint long throw by Poulson, won the header and flicked it into the open net, he then got his second of the game with an excellent goal. Receiving the ball with his back to goal, he rolled his defender with ease and unleashed a powerful strike that flew past the Trent Keeper.

The Rams’ sixth goal came in the eleventh minute as Liam Hunt and Matt Richardson linked up, Hunt found Richardson on the run and the Scottish International, kept his composure and rounded the keeper to finish into an empty net. Moments later Richardson got his second, cutting in from the left, he found some space and with a powerful strike scored Derby’s seventh of the game.

Debutant Jelinskas secured his Hat trick and his fourth of the game in a matter of seconds. His third was a tap in from great work out wide by Keeling who found Jelinskas with a wonderful pass. The scoreline extended again as he scored from the ten-metre line.

On his return to the side, Michael Thorpe scored the tenth before halftime. Jelinskas then got his fifth in the opening 17 minutes of the game, Illston was the next player to score and secure his hat-trick from the penalty spot as it was clear to see that Trent Valley was starting to lose their discipline.

After the break, it only took five minutes for The Rams to extend their lead, Jamie Gregory got on the end of a clever flick from Thorpe to score our Thirteenth goal of the game. Tough to take for Trent Valley as they showed a lot of resilience, making Cameron Hall make some big saves to keep Trent out.

The fourteenth and fifteenth came in a matter of seconds for Derby. Illston got his fourth of the game and then straight from Kick off Derby won the ball back and Richardson secured his Hatrick with a fine volleyed finish.

The sixteenth came from Keeling who got his second. Illston was involved yet again, finding Keeling with a great pass, on the run the number 90 scored with a fine finish. A minute later Illston scored another to make it 17-1.

With eight minutes to go a free-kick from Illston found the net after a deflection. Derby now just controlling the game playing with supreme confidence. The scoreboard clicked over to 20 as Gregory scored from the 10-metre line to secure his second of the game and then got his third and the twenty-first also from 10 metres out. The final goal of the game came from Alec Barnden as Thorpe got another assist to put it on a plate for the youngster.

That goal capped off a professional but also a ruthless performance from The Rams. Confidence is high and now that they are back on top of the league the side will be hoping to stay there.