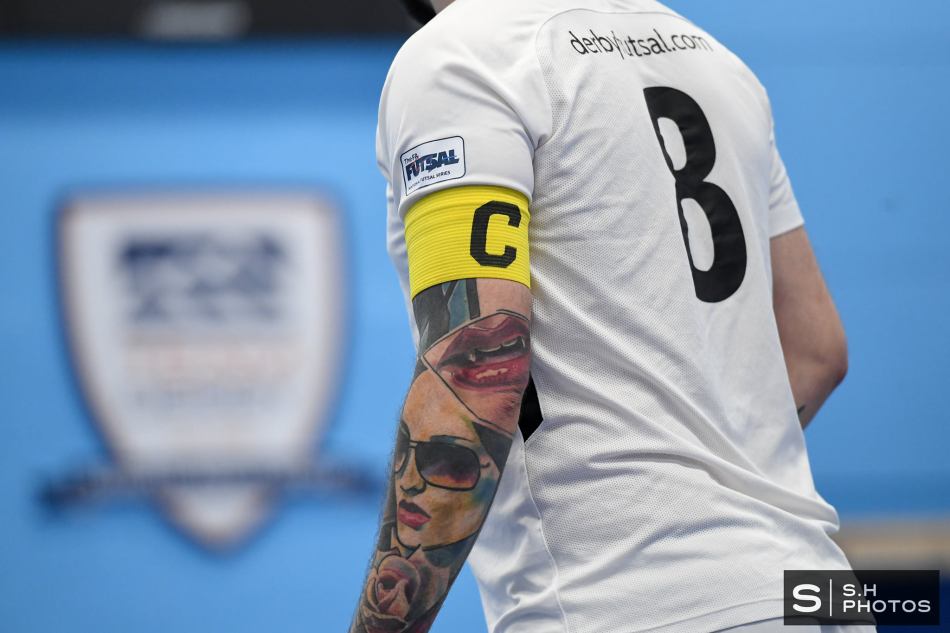 Derby Futsal continued their winning run in scintillating fashion with a 15-1 victory against Tent Valley in the National Futsal Series.

This win bought them close to York in the race for promotion as The Rams are only a single point behind with one game remaining.

Trent Valley was hoping to get their first victory of the season and get revenge on Derby as they lost 22-1 in their last meeting.

The sixth minute saw the first goal of the game. Derby’s dominance paid off as Jasper Korsholm found Jamie Gregory in acres of space. Running through on goal, Gregory slid the ball under the keeper to open the scoring.

Four minutes later, the lead was doubled through the captain. Jez Poulson threw the ball the length of the court to Pawel Tomczak. With expert control, Tomczak held off his marker and on the turn fired his shot past the helpless keeper. The two linked up again moments later, Poulson sets up Tomczak and on the run, the number eight produces a delicate finish to put The Rams in full control.

Derby was starting to get a hold of the game now. Joe Illston produces a stunning finish, on the slide from a tight angle, Illston squeezed his shot across the keeper and into the bottom corner.

Illston was involved once again seconds before the halftime buzzer. A wonderful, pinpoint pass found Michael Thorpe as he scored his first of the game where it was harder to miss.

Derby’s dominance managed them to score a sixth just before the end of the half. An excellent passing move severed through the Trent Valley defence, Tomczak was there to tap in for a first-half hattrick.

Three minutes after the restart, Korsholm got onto the scoresheet as he linked up with Tomczak to score the seventh goal for The Rams. The eighth came through Gareth Keeling, at the back post he had an easy tap in after a great pick out from Thorpe.

Liam Hunt scored his first of the game in the 29th minute from distance. As Trent Valley was at least trying to get a consolation, Hunt saw that their keeper was out of position. With accuracy and composure, he slotted the ball home from his half.

Derby got to double figures a minute later. Tomczak got his fourth as another defence-splitting passing move destroyed the Trent defence. Hunt’s second then came soon after, almost identical to his first, seeing the Trent keeper out of his goal, scoring with ease. He then secured his hat trick with a clinical finish to keep up the domination.

Trent Valley then got their deserved consolation goal, after creating some chances throughout the match and not giving in to the onslaught, Martin grabbed a well-earned goal.

Trent’s joy did not last long as The Rams continued to score, Kasey Riley ran the whole length of the court, steadied himself and struck calmly under the unfortunate keeper.
Frustration was running through the opposition and the fouls were adding up, this made Illston score the fourteenth goal from the ten-metre line.

The final goal of the game came from Thorpe, winning the ball high up the court, he managed to scramble the ball home to end Trent’s suffering.

Attention now turns to the final game of the season in two weeks against Loughborough. A win is a necessity to pile on the pressure and have the chance of promotion, in front of the BT cameras.